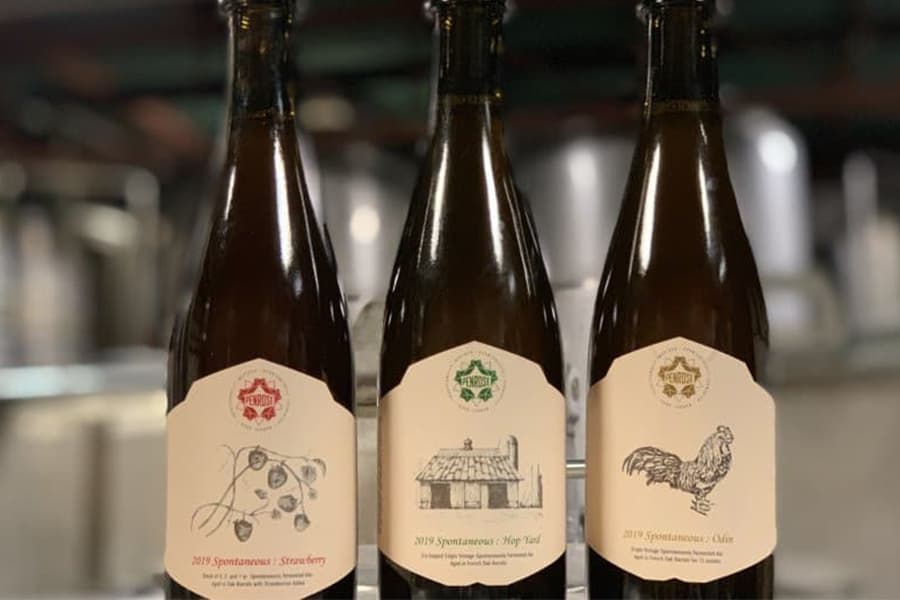 This wild project has been a long time in the works for us here at the brewery. It started with a trip to Madison by one of our brewers to meet up with someone as intrigued with wild fermentation as we were. From there birthed an idea that led to a plan that led to a brew that led to a lot of waiting, blending, and more waiting. In fact, that was the hardest part of this whole thing, the down time. Finally however, we have a beer. One that gets the point across and that speaks speaks more to the native flavors of spontaneous and native fermentation than any other beer that we’ve made so far.

To explain a little more about the details of this project, let’s first discuss the fact that yeast and bacteria are all around us. The air you breathe and the surfaces you touch contain little single cell organisms that if given the right conditions can make a magic that we like to call fermentation. The method of harnessing these little critters is nothing new, in fact it has been going on for centuries. Utilizing the naturally occurring yeast in the air allows a beer or wine maker to add a sense of place to their product.

There are some downsides to this however. The predictable nature of single organism pitched culture yeast (buying yeast from a yeast lab) is easier and more reliable that harnessing mother nature to do your work. To counteract this, we rely on patience, time, experience and blending. Over time the good bacteria and yeast out-compete the ones that don’t produce flavors that we like. We can encourage their growth with cooling rates, hopping amounts, and complex food sources created in the brewing process; but at the end of the day, we’re mostly at their mercy.

To start this project, we need a Coolship. We would use this coolship to cool down wort (rather than the modern day plate and frame heat exchanger) to an optimal temperature while also inoculating the sugary liquid with natural yeast and bacteria floating in the surrounding region. To find a coolship large enough for this project, we teamed up with a friend of ours, Levi Funk. Levi drives his mobile coolship around the surrounding areas to collect wort inoculated with local microflora.

With that equipment sourced, we now turned our focus to the beer side. We brewed a beer that was as close to a traditional Belgian Lambic in recipe and process as we could. 40% wheat, pilsner malt, warm stored / aged hops, turbid mash, and extended boil were all tools that we employed to give the Geneva yeast the best opportunity at surviving and thriving. From there, the hot wort was transferred to Pierre (the mobile coolship) where it sat overnight with exposure to the late winter air. After an evening of cooling, the now inoculated (with microflora) wort was transferred to French oak wine barrels and put to rest.

The hardest part was the waiting. As the barrels sat silent, we weren’t sure that we were going to get any fermentation that first year of barrel filling and the tension grew more and more. Finally, one barrel blew off with fermentation, then two, then the rest. We had activity! Something was growing, fermenting and creating CO2. From there, we waited a whole other year before even tasting these barrels.

On the anniversary of the first cool-in we did it again, and consequently the following years. From that first batch in 2015 until now in 2019, we’ve brewed about 10 wine barrels worth of spontaneously fermented wort. Year one didn’t develop a lot of acidity. Years two and three were the opposite. So we decided to blend the three vintages to add levels of funk, acid, wood and floral tones to the final batch.

We were then able to get some whole strawberries from Imperfect Produce to add to the blend. The team cored and macerated a whole pallet of super ripe, tasty berries and then added them to the tote for another extended fermentation and aging. From there, a special type of bottle was required since the beer was conditioned with Champagne yeast for a final touch of ‘pop’.

They say that good things come to those who wait — Well, we waited for over 4 years so we hope that you enjoy this as much as we do. — Cheers!

Sign up for our latest news and updates!
Go to News